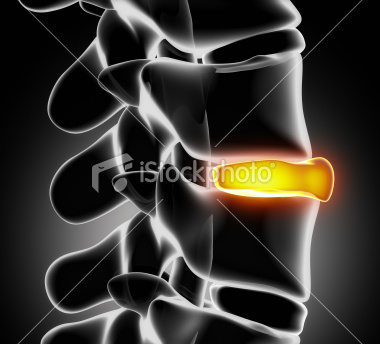 It’s estimated that as many as 75% of us will have some form of back or neck pain at some point in our lifetime. The good news is that most of us will recover without the need for surgery—and conservative care such as physical therapy usually gets better results than surgery. A herniated disk is one cause of neck and back pain.

Our physical therapist’s overall purpose is to help you continue to participate in your daily activities and life roles. Our therapist will design a treatment program based on both the findings of the evaluation and your personal goals. Your treatment program most likely will include a combination of exercises.

What is a Herniated Disk?

Your spine is made up of 33 vertebrae (bones) that are stacked on top of one another. Between each vertebra is a cushion-like piece of cartilage called an “intervertebral disk.” Imagine the disk as a tire, with gelatin filling the hole in the tire. The rubbery outer part is called the “annulus,” and the gelatin is called the “nucleus.” When we’re young—under 30 years of age—the disk is made mostly of gelatin. As we age, we start to lose some of that gelatin. The disk becomes flatter and less flexible, making it easier to injure. In some cases, the gelatin can push out through a crack in the rubbery exterior and lead to a herniation (bulge) or rupture (tear).

Herniated disks are most common in the neck (cervical spine) and low back (lumbar spine). In the low back, disks may become damaged by excessive wear and tear or an injury.

Your risk for developing a herniated disk increases due to: [custom_blockquote style=”blue”]

You might have mild to intense neck or back pain—or no pain at all. Herniated disks sometimes show up on the diagnostic images of people who have no symptoms.

When the disk ruptures (“herniates”) and a portion of the disk pushes outside its normal boundaries, it can “pinch” or press on spinal nerves or the spinal cord. This condition is called “radiculopathy.” The pressure can lead to back pain or to pain, numbness, or weakness in the legs.

The type and location of your symptoms depends on the location and the amount of pressure on the nerves: [custom_blockquote style=”blue”]

[/custom_blockquote]
If you have a herniated disk in the neck, symptoms are often worse with prolonged sitting and when lying down.

How Can Our Physical Therapists Help?

Your physical therapist’s overall purpose is to help you continue to participate in your daily activities and life roles. The therapist will design a treatment program based on both the findings of the evaluation and your personal goals. Your treatment program most likely will include a combination of exercises.

[/custom_blockquote]
This might sound like a lot of exercise, but don’t worry: research shows that the more exercise you can handle, the quicker you’ll get rid of your pain and other symptoms.

Your physical therapist also might decide to use a combination of other treatments: [custom_blockquote style=”blue”]

[/custom_blockquote]
Once your pain is gone, it will be important for you to continue your new posture and movement habits to keep your back healthy.

How Is It Diagnosed?

Your physical therapist will conduct a thorough evaluation that includes a review of your medical history and will use screening tools to determine the likelihood of a herniated disk. For example, the therapist will: [custom_blockquote style=”blue”]

[/custom_blockquote]
If you have muscle weakness and loss of sensation or very severe pain, special diagnostic tests, such as magnetic resonance imaging (MRI), electromyography, or nerve conduction studies may be needed. Physical therapists work closely with physicians and other health care providers to make certain that you receive an accurate diagnosis and appropriate treatment.

Research shows that in all but the most extreme cases (usually involving muscle weakness or high levels of pain), conservative care, such as physical therapy, has better results than surgery.

Can this Injury or Condition be Prevented?

Herniated disks can occur as a result of aging, but there are lifestyle changes you can make to reduce your overall risk: [custom_blockquote style=”blue”]

[/custom_blockquote]
Many physical therapy clinics conduct regular educational seminars to help people in the community learn to take care of their backs and necks. These seminars often are free and provide demonstrations along with written information about exercises for the back and neck, instruction on proper lifting and sitting postures, and other tips to keep your back healthy.

If you already have a herniated disk, your physical therapist can help you develop a fitness program that takes into account your herniated disk. There are some exercises that are better than others for people with a herniated disk, and your therapist will educate you about them. For instance: [custom_blockquote style=”blue”]